Commemorating 100 years since it was erected

The War Memorial on the Village Green was erected in 1921 to commemorate those who lost their lives in the First World War from Church Langton, East Langton and West Langton.

Names on the memorial:

For more information about these soldiers see below:

The event was opened by Chair of the Parish Council, Cllr Roz Folwell, who welcomed everyone. A representative from the University of Leicester then carried the wreath to the memorial and the following script was read:

"To the honour of those who took their part in the Great War. To the glory of those gallant fighters who came through, and to the memory of those devoted heroes who gave their lives in the cause of freedom. Now, every material asset a person possesses may flee; education alone is an asset of which an individual cannot be robbed. Let us, therefore, offer higher education as our war memorial."

The wreath was then lowered and the representative from the University adopted the attention position, took one pace rearwards, bowed her head, and moved away from the memorial.

The Last Post was then played on the bugle by Keith Britcliffe.

The event concluded with a reading by children from Church Langton Primary School. 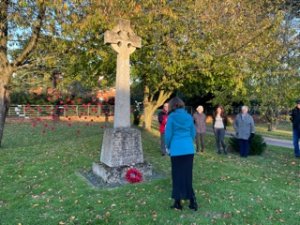 University of Leicester Poppy Pilgrimage - Playing of "The Last Post"